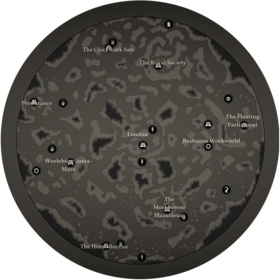 A possible chart of Albion

Albion is one of the four regions found in the the High Wilderness.

The heart of London's celestial empire, illuminated by the greatest feat of British engineering to date: a clockwork sun! While the cream of society enjoy tea in their salons and scandal in their newspapers, the wheels of British industry thunder.

The Empress Victoria reigns from her Throne of Hours, exerting authority over time itself. Her favourites are rewarded with freshly-minted months to prolong their lives, while those who displease her are condemned to the Midnight Cells, where every minute lasts a day, and no one leaves until their hair is white and their bones are bent.

New industries flourish. Unseasoned hours are mined in the Reach, then shipped to Albion to be refined on soot-choked workworlds. Casks of stamped and seasoned hours are then delivered to Her Majesty, to be dispensed at her pleasure.

The Windward Company maintains a stranglehold on the trade in hours; but a bold captain could make a tidy living running unlicensed hours to interested parties...